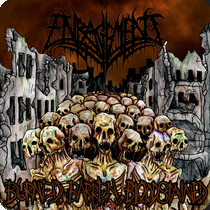 Enragement is back on the scene after their last full-length release in 2014 titled Omnimalevolence of Man. Their new album, Burned, Barren, Bloodstained will be released on June 9th courtesy of Inverse Records.


Burned, Barren, Bloodstained immediately lures you in with the initial chords of the first track, “River of Corpses”, starting out with a slow melody and immediately submersing listenrers into some no holds barred, thrash metal. Enragement is unique in that they use three vocalists, each building upon one another to create sort of harmonious chaos. This tactic is evident in many of their songs, creating a rare balance between heavy growling, typical in metal, and clean vocals - adding a twist to a style that not many can master as gracefully as this Finnish band has.


Let’s not discount the talent displayed with their instruments, either. Laden with explosive drums, coupled with dark bass, and ripping guitar riffs, Burned, Barren, Bloodstained does not disappoint. “Mass of a Thousand Suns” is a track in which the band displays their technical talents as well as their extreme, brutal sound. The flair with which this band handles their instruments, and the addition of the three vocal growlers becomes even more glaringly evident in their song “Ashen Unity”, which will make you want to get up and start a mosh pit in your living room. The song “Blood for the Sun God”, which the band just released their video for, begins the way music nightmares are made of. An eerie, chilling tale, this song will haunt your dreams for nights to come.


If you’re into metal that will make your skin crawl and hair stand on end in all the best ways, you’ll want to check out Enragement’s Burned, Barren, Bloodstained this summer. Their chilling exploration of the human condition is a dark journey you’ll want to take right along with them. You can pre-order the album now in anticipation of sharing this dark, twisted, tangled ride.

Written by Har-Lena Quinn on March 28, 2017 for Bloodrock Media
Check out our website and follow us on social media
Posted by Unknown at 3:18 PM